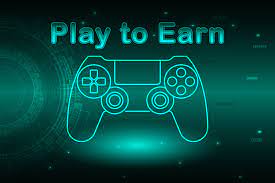 Gaming has evolved over time. From the early green-screened gaming devices to Xbox and PlayStations, the gaming industry’s growth has been rather significant. In the past, video games were only a way to chill and relax. However, these traditional games seldom provided upgrades without a price. Even though they gave a free-to-play experience, further upgradation and in-game items may cost you.

This issue needed addressing, as these items held no value in real life. It solely benefitted the developers. Imagine a case where the developer upgrades the games. This will require an item upgrade, in turn, costing you. What if the developer decides to quit/shut the game? You will lose your in-game collectibles just like that.

Now imagine this, you invest your money in the in-game collectibles, and the availability of an upgrade pops up, or the game goes on a hiatus. However, this time, you have a chance to trade your items with real currency. How good does this sound? Very, I’m sure. The advent of NFT-based P2E games gave players an identical opportunity. The gamers had the chance to invest and earn by playing the games.

Let’s have a debate on the P2E gaming platforms.

As mentioned in the above section, the advent of NFT-based P2E gaming platforms allowed players to earn while gaming. The early games provided a space for destressing after a long day of work or school. However, the collectibles needed either time or a price. Also, the games brought benefits only to the developers.

When the play-to-earn model was introduced, the world was opened to a platform where their investment could be returned with real-life currency. The P2E games included in-game collectibles that players could trade on compatible marketplaces. The more they played, the more they earned in-game items. The feature enabled the players to generate revenue while doing what they loved

NFT P2E games prove to have one of the most potent and growing communities in the gaming sector. Research done by DappRadar showed that Axe Infinity housed a community of almost 106,000 daily active users and 302,000 weekly active users.

Further, unlike traditional games, where the developer had the upper hand in the game’s upgrades, P2E games supported DeFi, short of decentralized finance, allowing the users to have their opinions registered, in turn being a part of future developments.

The gaming industry plays a huge role in spotlighting blockchain technology. This has caused a major stir in the entertainment industry, making others curious to get their hands on the advancement. The gaming industry bagged around $173.70 billion by the end of 2021 and is expected to rise by 30% by 2028. With this, the world will be largely exposed to the power and development of blockchain technology.

NFT-based P2E games have a scope where the players can choose to earn income from the secondary market. While still in the budding phase, these P2E games attract many first-time gamers, increasing the engagement percentage of the game.

As it is good, there is bad as well. Hence, when the developers start to concentrate on the financial aspect of gaming, the fun factor gets minimal attention. And that can be a source of dissatisfaction in the player’s community, as fun is what they look for primarily.

Some NFT-based P2E gaming platforms like Axe Infinity require the players to invest in the NFTs before starting the game. These NFTs can sometimes cost you a few hundred dollars as well. This creates a way for skepticism to enter the market. If the players want to try the games out, they cannot, as these games first ask you to invest and then play.

These NFT games can sometimes make you stay for a long time just for you to get back what you originally invested. This is because the NFT market is wavering and solely depends on the demand for a particular NFT. For instance, if your NFT is not in demand in the market, the price of the NFT will drop significantly.

Researchers are still exploring all the potential of blockchain technology, and nothing can be said definitively. All being said, the major con of the technology is that it’s still in its infancy. Thus, it lacks a well-defined structure.

Taking everything into consideration, we can assume that blockchain technology is still being explored, yet it shows great potential in the market, whether newly developed gaming or early gaming; every creator wants to leap with this blockchain introduction. These NFT-based P2E gaming platform is slowly moving to the Metaverse as well, making a buzz for visual effects and parallel virtual worlds.

Whether gaming or just owning a book, the blockchain market is branching out nervously in the entertainment sectors and showing its potential for the future world economy.